This page provides details of Garage Services recommended by our members, Suppliers of Spare Parts, and Service Data for our P4s.

Mob: 07958 962751
Stan is the Chairman of the Rover P4 Drivers' Guild (RP4DG), and he also runs his own business servicing and repairing P4s. There is nothing about this marque that he does not know and some of our members make the journey to see Stan in Essex to get their cars serviced and repaired.

Richard has been recommended by one of our P4 owners who has known him, he says, 'for decades'. His workshop in Smallfield is just to the east of Gatwick airport and can be reached via the M23 at Junction 10. A classic car owner himself, Richard is very resourceful and knows a lot about our cars. Richard also rents a part of his workshop area to Colin, a body shop specialist who can deal with the rusty bits!

Julian Trivess-Smith runs a one man business specialising in Auto Detailing - the detailed restoration of classic cars, particularly the engine bay. Although based in Essex, he will travel anywhere he is needed. One of our Rover P4 owners recently emailed fellow Guild Branch members saying: If anyone is thinking of having the engine bay of their P4 smartened up I can recommend Julian Trivess-Smith. He worked for well-known Classic Car dealers P & A Wood before retiring since when he has built up an impressive client list including winning entries at Pebble Beach and Goodwood. He often works on cars like Bugatti and Rolls-Royce but has done several P4s. 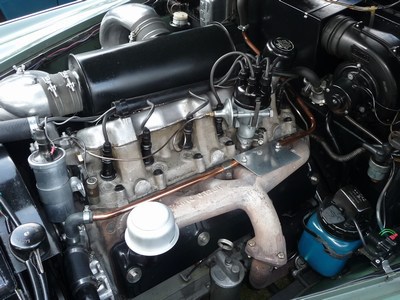 He spent a long day on my car's engine bay and the results are impressive. 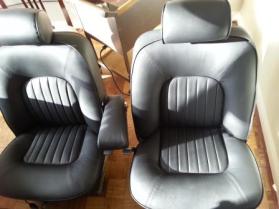 The finished seats for the Rover P5B. 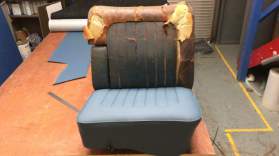 One of the seats from the Rover 105S, partly restored.

One of our members has highly recommended Merlin Motorscreens following the most successful refitting of the rear screen to his Rover P5b Coupé complete with metal trim. This is known to be a challenging task.

Paul Kolk, one of our members, owns a whole host of classic cars including a number of P4s. He has a workshop in a farm building near Shere, and often does work on fellow members P4s. If you need a spare part for your P4, Paul may be able to help before you look further afield. Finally, he has a breakdown truck which could be used to move your car, or maybe rescue you, but only during social hours, and only if you are outside the London emissions zone!

Phil Kerkham is a P4 owner, and is also one of our members. Based in Surbiton, Phil has a mobile car servicing business, and he is happy to extend this to classic car owners on the basis that he provides assistance and guidance to the owner who wants to do it themselves and learn in the process. Whilst most owners might have given up trying to do things to their modern cars with the need for all manner of computers and software, the P4 is not a daunting prospect for any practically minded individual with a decent set of old spanners (non-metric).

There is no shortage of spares for our cars, both new and second-hand, and prices are quite reasonable and nowhere near as high as for some other marques of car. Here is a selection of the best known suppiers, but it is always worthwhile checking in the 'Overdrive' magazine of the Guild in case we have missed someone. They are:

John is a delightful gentleman, who is supported by several equally knowledgeable people. To order spares it used to be necessary to make a phone call that was answered by a cheery voice at the other end, but now if you want to order in the modern impersonal way there is a good website.

J R Wadhams have been running a good website for some years, and can provide anything that a P4 owner might need. Now in much larger premises since about 2010, and located centrally in UK, they are easy to get to for that emergency part. A failed radiator on the day before a big car show resulted in my driving to Stourbridge to buy a rebuilt one (exchange basis), bring it back and fit it. I got to the car show the following day!!

Richard Hedger's store of used P4 parts is a delight to see. For someone restoring a P4 a visit with a shopping list is essential, even though it is a good 3 hours or more from Surrey! The out-buildings are stuffed with parts, all categorised and collected together, and he knows where everything is located. Richard quite often sells parts on eBay under the name of roverp4man.
Rover P4 Service Data
Rover P4 Servicing Schedule

If you are about to settle down to planning what you need to do to service your P4 then you need the go to an old Guild website that is still running to get the Rover P4 Servicing Schedules. On this page you will find a link to required Word document.

Those of us with the Rover 110 should have a single large SU carburettor hiding under the bonnet. It is not a difficult job to set this up so that the car just purrs and sips the least amount of fuel necessary. Of course it is essential that you check and adjust the ignition timing first. All that you need then is a print of this well-used and slighty greasy 1966 version of the pamphlet entitled 'SU Carburettor Type HD - Tuning, Adjusting & Servicing' .